As with my last post, I will now regale you with the Christmas presents Tabitha is getting this year. She’ll be 2 in January so bless her heart, gifts for her come around basically once a year.  Its rough having a birthday so close to Christmas, but we’ll try to make it up to her! And bonus! All the fun things that I couldn’t get her for Christmas because of my self-inflicted “Wear, Need, Read, Want” rules, I can just get her a few weeks later at her birthday 😉
( way to ruin the point of the game there, Abigail!)

So, here’s what our little almost-two-year-old is getting for Christmas this year!
Wear: Unlike with her brother, Tabitha does not need anything in this department! In fact, thanks to the generosity of my sister and friends, I have only bought a few odds and ends for Tabitha in these two years of her life, and none of those odds and ends were because she really needed them! Girlfriend has clothes and shoes coming out of her ears! SO that said I decided to go with an “accessory” this year and I found the most fun thing a two year old girl could have:

It’s called a Poochie & Co Purse and in searching the internets to find a picture of the one I got for Tabitha I found that a real live celebrity is also a huge fan ( remember the adorable little girl from Beasts of the Southern Wilds? Or maybe you’ll remember that she’s the little girl from the upcoming remake of Annie coming out this Christmas? Yeah, Quvenzhané Wallis. ) Annnnyway, it makes me happy that my daughter is already going to have a celebrity purse! hahaha!
In the Need category this year, I went around and around. There are a lot of great toys that can be helpful in teaching your kids all sorts of important things that you feel like they “Need”. But I finally decided on this game Barnyard Bingo Game. Because she’s played with it at Speech Therapy and she’s totally into it.  The best part is that the game can be used “as is” ( according to the rules) but I think it also has a lot of potential for other forms of play which is important when we purchase just about anything around here. But just to prove to you Tabitha’s enjoyment. I took a video of her at Speech Therapy today:
When it came to Tabitha’s Read book this year, I went with something I knew we’d both love but that would also continue to help Tabitha with her talking. For whatever reason nothing promotes Tabitha speaking quite like Leslie Patricelli books. She LOVES them! And honestly, I do too! They are funny and fast and just enough quirky!  Tabitha is getting this one for Christmas: 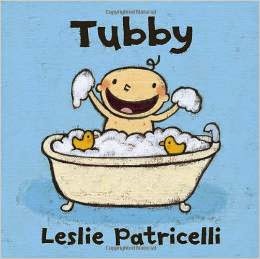 And now for Want:
Eeeeek! Once again I went and bought something on sale waaaaay ages ago and I’ve been DYING for Christmas to come so I can give it to Tabitha! I purchased this on Zulily  for next to nothing way back this summer! (!!)  and now I’ll finally get to give it to her!

Green toys tea set
Having to watch her put her stuffed animals and dolls at their tiny doll table and feed them with random cups has been KILLING ME 😉
So there you have it! That’s what Tabitha is getting for Christmas! So, I’m curious, what are your little girls getting this year? Anything you’re super excited about like I am?