By theabigailwilson on February 19, 2015
Edit:This post was edited in 2017 to mirror some new favorites! Enjoy!

I have been remiss. Here I have written all kinds of book reviews on my blog, particularly children’s books but I have not done an official blog post on Kids Bibles. Of course, this hasn’t stopped me from being super vocal about this topic all over social media and in real life, so maybe this won’t be news to any of you but either way, we need to go ahead and talk about this here once and for all.

First off, there is something totally supernatural going on with The Bible In Pictures for Little Eyes.  This little biblestory book was sadly out of print, but was easily accessible on Amazon and on used books sites. That said, my mom had given me a copy when I was pregnant with Ransom and we started reading the little paragraph stories that went along with each large, colorful picture ( these are OLD SCHOOL pictures- Jesus dressed in immaculate white and blue wherever he goes, lots of caucasian children…you know the drill) when Ransom was probably 18 months old. He quickly became fascinated with the book. He would flip through the pictures on his own almost every day. It was adorable and while, yes, some of those pictures are so politically and socially incorrect now, it is a very in-depth bible story book! And NOW there is a new edition! Same great writing-It covers it ALL and in pretty good detail without making it totally “fluffy” which is my least favorite thing: watering down the Word of God for kids. And, most importantly, Ransom really liked it.- However, I haven’t seen the pictures in the newest edition. I don’t know if they would be as engaging, I’ll have to get a copy!

When Tabitha came aroun she was basically the same age when she became OBSESSED with her “BBBYYYBEEE-LLLE!!”  In fact, she loved the bible so much, that the already old copy, was completely falling apart and I had to buy a new one.  The other day I had to do some recon missions on house-hunting and she spent an entire HOUR sitting in the back of the car looking at her Bible. One book. For an HOUR.  Honestly. 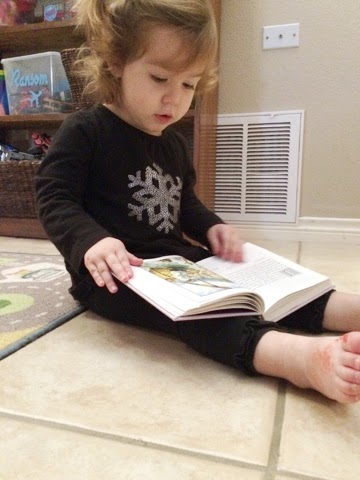 Ransom moved on to a new Bible Story book at around 2 and a half, maybe three. The little paragraph stories in the first story book where just not detailed enough, and he was old enough to listen to something more in-depth. Enter my FAVORITE BIBLE STORY BOOK EVER: The Jesus Storybook Bible. Now, in the same way that the first bible had art-like pictures, this bible kind of had weird cartoon-y pictures that I was skeptical about, but then I read the first story of Adam and Eve and a BAWLED MY EYES OUT.
People. This Bible Story book is BEAUTIFUL. It answered all my desires for a bible story book that was simple enough for a child to “get” but didn’t water down the truth.  Basically, I wish that  C. S. Lewis had written a Bible Story book for kids ( wouldn’t that have been GOOD?!) but since he didn’t this comes in a very very close second. That first story talks about the Fall of men with Adam and Eve and says, “Well, in another story, it would be all over and that would be “THE END”. And then you turn the page and it begins to tell us the wonderful Love of God for his children and that’s when you just start crying, people. It is so so beautiful. “It will not always be so! I will come to rescue you!…I will get rid of the sin and the darkness and the sadness you let in. I’m coming back for you!”
I basically wanted to start cheering right then and there, and then as the stories continue, each one ( particularly those rascally humans in the Old Testament stories) showing the inevitable sinfulness of man, it continually points to the Hope of Jesus and God’s “Unstopping. Never Giving up. Unbreaking. Always and Forever Love.” for us and it gets me every. single. time.

But, Ransom has been through the Storybook Bible quite a few times and now the plan is to switch it out with the Egermeier’ Bible Story Book, read one and then read the other and then back and forth for a while. The stories in this one are a little bit longer and there are fewer pictures so probably best to wait till they are 4 or 5 to bring it in to the mix, just depending on your kiddos attention span. But the stories are SPOT ON and -full discloser- it is the Bible storybook that I was read from when I was a kid so I might have a tiny soft spot for it!

This brings us safely up to the Elementary School years…
I have been giving this next Bible as a gift at every birthday party we are invited to for Ransom and I don’t plan on stopping any time soon! The Action Bible it is a graphic novel depiction of the Bible and it is very thorough. In fact, it was so good at telling every single story that during my first read through, I was worried that it was going to tell the story of Lot and his daughters. ( It didn’t! Whew!) Sure, sometimes the pictures are a bit intense ( Revelations. Some of the prophets)…but for the most part it is a huge hit! My kids will sit with it for hours just looking at the pictures. And now that Ransom is a reader he reads it for himself. It is really a great introductory step into early readers and the Bible.

And now I will leave you with pictures from last night! First Brett got to baptize Tony and then Tony baptized his son, Troy! YAY!!!!!! 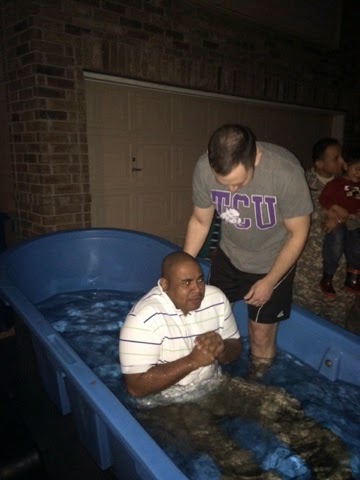 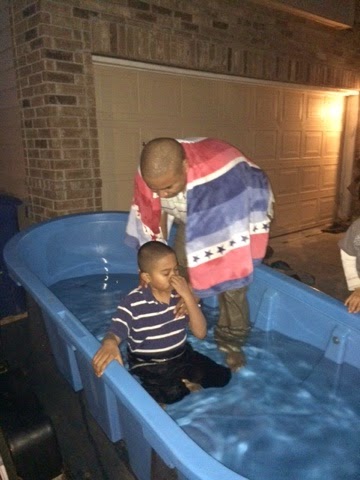