Last month I took a break from Facebook. Social media had reached this point where I wanted to give everyone a stern talking to, send them to their room and then, in some cases, there was a need for at least one or two spankings.  But since I ( sadly, thankfully-whichever) wasn’t anyone’s mom- I  left the conversation.

But, I would HATE for you to miss out on what happened to our family during the next month while everyone was fighting over politics. I would never do that to you. I would not want you to miss hearing about the time the Wilson’s NEARLY DIED OF THE PLAGUE.

First off, the major downfall of public school!?! Ransom is like a walking petri dish. First he brought home this insane stomach bug that messed with his gut for DAYS and DAYS. The craziest part is that he would seem better, have a good day at home ( driving the rest of the family batty) and then he’d throw up in his bed that night assuring another day home from school! By day 4 I was losing my mind, and I was starting to worry that there was more going on. My already-skinny-little boy was wasting away and he didn’t seem to be getting any better. As he lay on the couch staring into space I called the pediatrician to make an appointment…. As I talked to the receptionist I casually stroked my sweet little 6-year-old’s head like any motherly-mother would do….

Wait. My hand froze in mid-stroke.

I finished up making my appointment and then got closer to Ransom’s head to make sure…..

YES! There was a little bug crawling on his forehead!!!

I picked it up and took it into the kitchen to get a better look…I then furiously googled images on my phone to confirm.

And friends, I am not ashamed to say that I nearly LOST MY MIND.

If I had had a paper bag I would have blown into it. Instead, I did the next best, verbal-processor-thing-to-do: I called my sister, got her out of her weekly bible study and hysterically cried into the phone.

But it wasn’t just myself I was thinking about- or even my other two kids, or Brett- who was on his third week of nightshifts…nope, I was also thinking about my friend- M.
M’s husband had just deployed and the week after he left- their house flooded. Leaving her not just alone, 6 months pregnant, with a two year old- but now houseless.

It had been our PLEASURE to invite them to stay, but now as we looked down the already 4 days of stomach bug running rampant in our house, but also a possible LICE INFESTATION. I felt like we’d invited her out of the frying pan and straight into the house of FIRE.

The worst part?!?! When I told her we had lice and she mentioned ( as any sane person would) leaving and going to stay with another friend, I had to basically tell her she COULDN’T leave! Not until we’d checked her and her daughter for lice! She now was not only living in the cesspool of the Wilsons, but she ran the risk of being another carrier if she tried to leave it.

It was truly mortifying.

Thankfully when I googled, “What to do about lice” one of the first things that popped up was, “Don’t freak out.” followed by “Don’t scare your children.”
So I was able to quickly pull myself together and make what followed into a twisted and insane “game”. It clearly worked. My kids probably think treating your head with tea tree oil and getting a random headshave is just par for the course with me as their mom….

We ended up doing the deepest house clean of our lives, shaving Ransom’s head down to the scalp and banishing all the rugs, stuffed animals and dress up clothes to the garage for 2 weeks…the lice HAD to be gone! 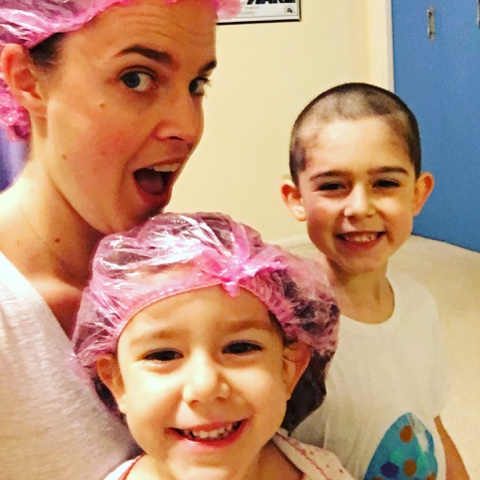 I’ll now spare you the details of the next 2 weeks when Justice and I both got the stomach bug, followed by back to back colds. Or when Justice missed his own 1st birthday because he was too busy barfing on his “My first birthday” onesie. Instead, I’ll skip on ahead, when after another fitful night sleep ( I would find out in a few weeks time that Justice had a double ear infection. hooray.)  when I woke up scratching my head…. 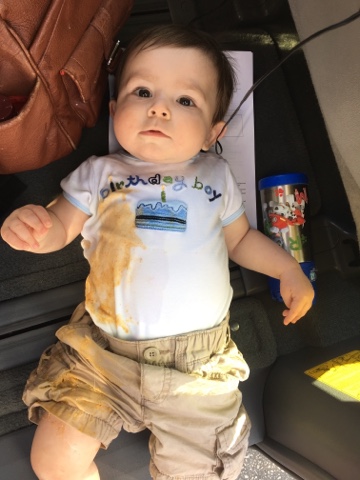 And then later in the morning, as I was scratching my head, I pulled my hand out holding a little critter between my finger nails, I knew I COULD NOT HANDLE THIS ALONE.

But this time, with Thankgiving, more visitors and most importantly of all- My Birthday Purple Hair Dye Job fast approaching, I did not take matters into my own hands. Instead I told Brett that if it was anything under $300 ( a randomly large number that I pulled out of thin air to assure that I got what I wanted, haha) I was going to call those “Lice Doctor” people you find on the internet to come take care of this problem. Sometimes you have to give up and throw money at problems. And if you don’t have enough money, then you sell your house and use that money. Which turns into a two birds, one stone situation because you’ve gotten to sell your lice-house to the next unsuspecting person.

But, thankfully it was under my dollar limit ( whew!) and the very next day a nice little hair dresser, turned lice catcher arrived at our door ( in an unmarked car! hahaha!) to inspect all our heads! Turns out, I was the only one with lice, some little licE from Ransom must have bailed ship onto me hung out in my lush locks, and then not seen fit to transfer to any of the other members of our family because, why leave the super long thick hair, unless you have to, right?!? RIGHT?!?! And so we should be, thankful for my long thick hair?!?!?! THANKFUL?!!

But now, according to the Lice Doctor Guarantee our house and heads were finally “safe”.

However, honestly things had been SO BAD for a solid month at that point I absolutely  HAD to turn the situation around, so I borrowed from my friend Deb, who had used a line on a unsuspecting plumber months before, and told the Lice Doctor that while she was telling me bad news- that I had lice- that I had some GOOD NEWS for her!

Because, friends, did you know you can share the Good news of Jesus with someone in just one minute? 56 seconds in my case? And I KNOW you can do it, because I’m a girl of many words and I’ve been able to do it over and over again! The great part of this particularly short version of the gospel is that it almost ALWAYS sparks good conversation with whoever you’re sharing with! And it did in our case. The Lice Doctor and I got to have a really good heart to heart about her thoughts on religion in general and I got to share with her my thoughts on a relationship-a Relationship with Jesus. It wasn’t scary, no one got hurt ( other than the 3 lice she found on my head *crying emojis forever* , and this chick got some of the most important information she’ll ever hear.

Thankfully this round of the plague is officially over, here at the Wilson’s House. Brett and I got to help lead a training for No Place Left* here in San Antonio and also receive some great encouragement from all those who attended.  And some  other cool things have been happening. Brett got to baptize an A/C repair man who had come to our street a few days ago, and who walked away with something so much greater. I got purple hair. 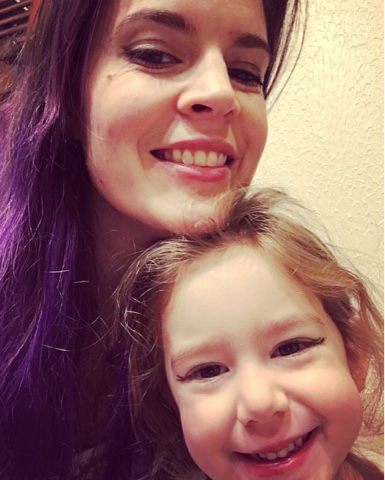 * Brett and I have been a part of this movement for a while, mostly when we found out that there is a startling MAJORITY of people in the United States who have no desire to go into a traditional church, but who ARE willing to learn more about Jesus!  We’ve been trying to focus on reaching these unchurched people, meeting with them in our home, their homes and any coffee shop that’ll have us! We share the Good News of Jesus in an accessible, reproducible, teachable way based on the principles we see laid out in the Great Commission ( found in Matt 28:18-20)  so that those who are hearing about Him can easily share it with their own friends and family.  In this way we would like to see No Place (or people group) Left where the Gospel has not been shared. If you’re interested in more information about what we’re doing, do not hesitate to private message me!