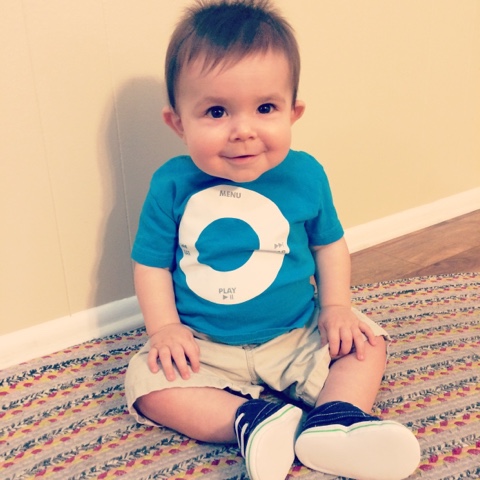 First off, let’s start with Justice. Poor dude. His little routine has taken a major hit, we’ve pushed and shoved naps into various different spots in order to accommodate his siblings ( hashtag third child problems). The bottom line is that while at first I was sad that Tabitha had to wait two WHOLE WEEKS to start her own little school program ( more on this in a minute), it turned out to be a major blessing. We were able to adjust a little bit at a time regarding Justice’s napping  ( I often have to wake him up from his second nap to pick Ransom up from school and that kills me just a little each time I have to do it.)  as well as adjusting to having less fun and exciting children around to play with/observe/try to ruin their fun.  Bottomline, the jury is out on whether Justice will ever really like having his siblings in school. He would much rather nap when he wants and have two people who are ALWAYS entertaining to follow around all day. 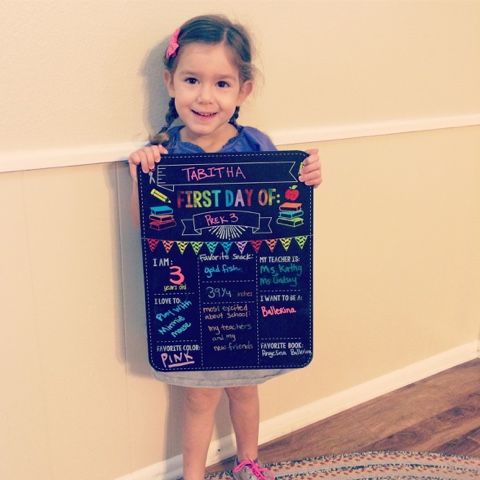 As I alluded to early, Tabitha definitely struggled with sending Ransom off to school. Firstly she wanted to go to school too! She’s showing more and more of her extrovertedness these days and as soon as she discovered that it was “school time” she was asking very few minutes when she might leave for school too! It was also hard visiting her school, for family night, two weeks before she actually began. She learned both her teachers names immediately and began to talk about school constantly. She also became a tad more demanding at home “by herself” with Justice and I, and is constantly wanting me to play with her. Turns out she misses having Ransom as a play mate far more than I thought she would! Let’s just say everyone was relieved when she had her first day on Tuesday! 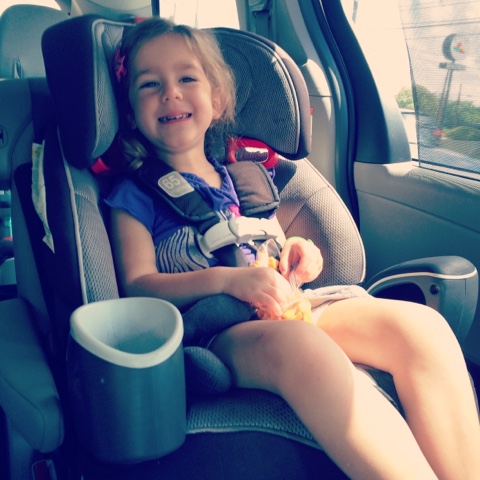 The fun thing was, Ransom was almost as excited for Tabitha as she was, and the first thing he asked when we picked him up from school that day was how her day went. And as for her day, it went great. In a lot of ways I think we will learn more about Tabitha’s school days then we ever did about Ransoms. When we picked her up on the first day, we learned more before we had even left the building then I think we had all year when Ransom was in Prek3! ( in case you are interested, she played doctor in Little Town, did a parachute dance-though they didn’t have balls in it like they do at the library!-had apples and cheese for snack, she made a friend who did not like cheese, and they read a book about a dog.) My favorite part of the first day was the confident “Bye Mom.” and the quick hug before she ran off to play with magnet blocks. This girl was MADE for preschool! 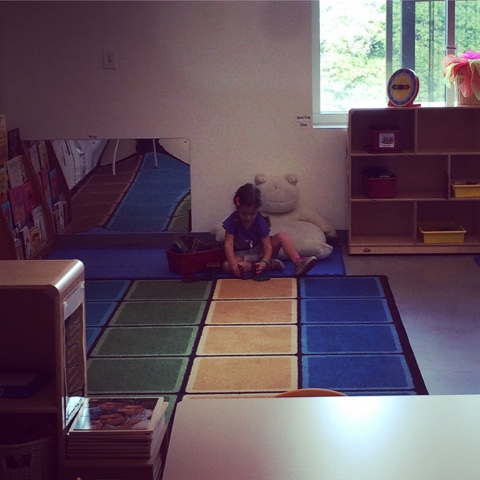 My next favorite part is walking through the quiet and clean children’s museum an hour before they open as we drop Tabitha off. Its so cool that the museum is their own private play place for a whole hour before it opens! And knowing how they take EVER. SINGLE. detachable playing toy and sanitize it at the end of the day makes me kind of happy too. The one sad thing about the class is that there is only ONE other girl in the class! I mean, Tabitha is no stranger to playing with boys-she’s been doing it for years with Ransom and his friends-but I was hoping for more girl friends for her this year. Thankfully she and the other little girl ( aka the girl who doesn’t like cheese) in the class are already getting along great. 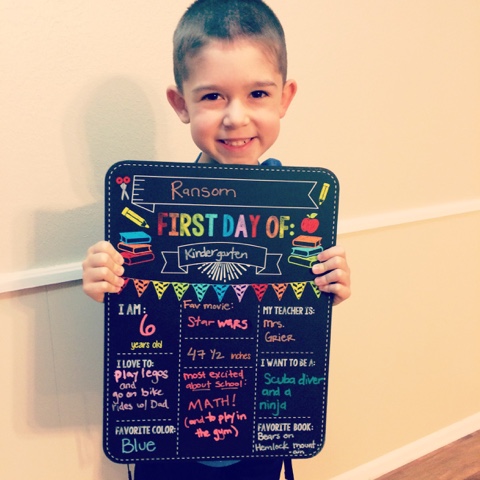 And now for Ransom. We knew going into this year that Kindergarten was going to be an adjustment. But thankfully it was not as rough as I thought it would be! Not by a long shot! Ransom was genuinely excited about going and was a ball of  happy nerves and excitement on the first day! I’ve learned from these short first three weeks that our home as exactly one “morning person” in it, and his name is Ransom. The rest of the family, including Tabitha, speak in monosyllables for a solid hour while Ransom is almost immediately wide awake and ready to discuss which one of his cool t-shirts he is going to wear that day. The 7am alarm is far harder on me and probably Tabitha then anyone else. When we went to meet his teacher the Friday before school started, I instantly liked her. And my instincts seemed to hold, when on the first day of school she was insistent upon letting us know about an incident with another kindergarten teacher who had yelled at Ransom and made him cry followed with a description of all that she had done to make Ransom feel better. Honestly, Brett and I were more worried about whether Ransom had DESERVED to be yelled at ( probably), rather than our son crying. But she was so sweet and sensitive and obviously upset with the other teacher and their actions, that I knew my uber-sensitive son was in the right class. 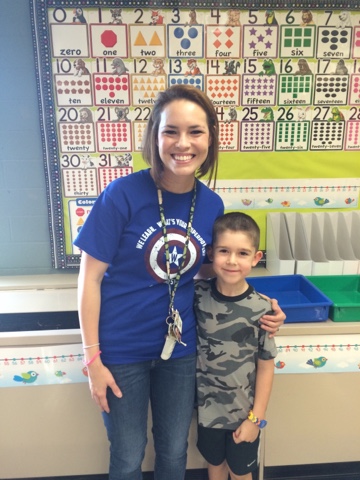 And speaking of crying. My goal for the first two weeks was to go two days in a row without Ransom having a random melt-down when he got home from school. And by random, I mean random. One day he lost it in a ball of tears about spilling some ranch dressing on his water bottle while eating his afternoon snack. Yeah. His tears came from seemingly no where and were always very intense and lasted a while. One day he cried over remembering an incident that had happened earlier in the day when he’d hurt his chin on a hand railing. Believe me when I say, it was hard for this non-feeler mother to have the right amount of sympathy for these outbursts. But I did know they were more a symptom of Ransom holding in all his “strong emotions” all day at school. They were symptom of him having to be around lots and lots of people and peers for hours and hours. For a little introvert, it was very hard work. So, it wasn’t that I wanted the crying fits every day to end because they were inconvenient, but because it would show me that he was learning to adjust. Thankfully now, in week three, he’s already done sooooo much better, and I can tell he’s starting to level out a bit. Maybe learning to pace himself emotionally throughout the day when it comes to his socializing? But, his coping skills do seem to be maturing. HOORAY! My favorite thing about school for Ransom so far is how much I miss him, I know that sounds strange, but I have so much more emotional capacity for his outburst ( when he has them) now that he’s at school! My second favorite thing is seeing how much he really does love school! He’s already reading more-something he knew how to do at the end of last year but had zero interest in doing-but something about “being in school” has made him embrace his already known abilities. He talks about his friends a lot and tells us about their electives -gym, music and library ( definitely his favorite part of the day) and while we don’t get as much information as we do from, say, Tabitha- if we’re patient he does give us pieces of information throughout the afternoon and evening. He loves picking a book out at the library. He likes dancing in gym class and he loves to run errands for his teacher. He also loooooves getting to eat from the cafeteria one day a week  (it costs $2.20 so we read the months calendar and then circle one day a week that he particularly likes- you would think that they were a 5 star restaurant the way he raves about their “star shaped cheese sandwiches! hah! But, really, I think he just likes getting to make his own choices about all the different sides and drink etc.)  My least favorite part about school is how LONG it is! This would also be Ransom’s least favorite part too. If given a choice I don’t think he’d want to stop going, but he WOULD want to shorten his day! He often prays that school would be shorter during his nightly prayers, and I too wish that kindergarten was still a half day thing. Sigh.
Thankfully, I feel that with more “practice” at this whole “school business”- God will answer his prayers, by making the day “seem” shorter.