a meditation on calendars

I can’t mention enough how much I love a good “plan” my love language definitely involves a to-do list and an extensive in-depth calendar. So, when I started to feel slightly wobbly on my fall plans ( aka. Ransom not heading off to kindergarden this year*) I bought myself a calendar and weekly planner. (I got Amy Knapp’s Christian Family Organizer  and I’m loving it!)  And I started filling that puppy out like it was my job. 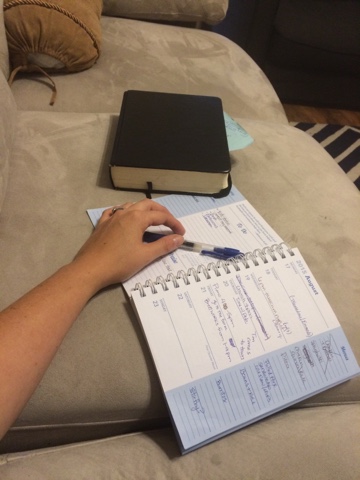 I am already feeling much calmer-and since we are now into week two of Brett being back at work and the kids and I settling into a “home school” routine. I thought it would be fun to discuss my “plans” here because even though I love a good plan like it was chocolate and a bouquet of flowers, I have also been around long enough to know that my plans will inevitably change ( most definitely come end of October ( with the entrance of Justice) -and maybe come next week just because, who’s to say?!)

First off, I realized, after a pretty rough Week One, that my kids play best- happily and peacefully-in the morning hours, it is the afternoon hours-witching hours and all-that we start to hit some serious rough patches. I also discovered that the sooner we head out the door and do something outside the house in the morning, the better. That’s just how we are and so I’ve tried to adapt our plans accordingly. Basically I put all our “school” stuff at the end of the day, having planned crafts and school time for Ransom in the afternoon, when he’s already begging to have someone  play with him and when he and Tabitha are at each others throats, just seems to work.

Here’s the breakdown of our week:
Mondays: Review the week with our wall calendar( telling Ransom what to expect for the whole week works REALLY well! He is clearly my son)
Introducing the weeks theme with something fun the kids can do alone** so I can spend time writing grocery lists/meal plans etc.
Errands for the week
lunch/nap/rest time
school ( usually only consists of about 30 minutes of sitting at the table and we can get everything done)
dinner
praise-jesus-daddy-is-finally-home-time.

Tuesday: Morning craft ( I don’t have anything specific to do outside the house on Tuesdays so I’m filling it in with a craft if we have nothing to “do”)
lunch/naps/rest time
School
( soccer practice will probably be added in here soon!)
Dinner etc. etc. Wednesday:
Play N’ Learn at the Library ( hooray for this awesome program! Not only is it themed with crafts and stories and songs but it is aimed straight at both my kids ages!)
lunch/naps/rest time
School
Early Dinner
Home church

Thursday:
Slow morning because we’re always up late for church. A little schooling, mostly hitting up the crafts and themed stuff that they’ve enjoyed the most so far that week.
Lunch/naps/rest time
Some play time
Piano lessons for Ransom
Soccer practice
Somehow have dinner in there…. 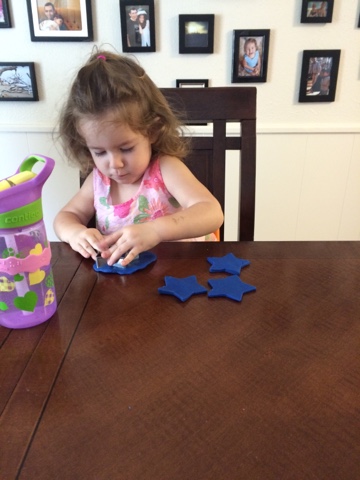 Friday:
Field trip ( hitting up the children’s museum/zoo/ park whatever…)
Lunch/naps/rest time
School/wrap up the weeks theme
Dinner
Movie because Daddy works till 9pm on Fridays and Mommy is D-O-N-E.

So there it is! It is Thursday and we’ve almost made it through another week. Whew! Sure, it is admittedly not as easy as driving my kids to prek for a few hours in the morning and I know I will be filled with great amounts of envy come next week when all of San Antonio heads back to school and I’ll see solo mom’s casually cruising Target, but I think it is manageable for now. I also give myself the freedom to hate it, and to have rough days and also to totally take three months off after having another baby and just push the “survival mode button”…I know that with all things there are seasons for being super mom and there are seasons to survive. Our kids surprisingly live through them all 😉

* If you’re interested in why we are holding Ransom back from Kindergarden even though he’s admittedly “academically” ready- I totally recommend reading the following books: Outliers:The Story of Success  which was enough to convince me that while Ransom is actually a few days over the Kindergarden birthday cut off it is WELL worth allowing him a year to mature emotionally and physically before throwing him into Kindergarten with kids who have been 5 for months and Boys Adrift: The 5 factors Driving the Growing Epidemic of Unmotivated boys and Underachieving Young Men which was seriously one of the most intense books I’ve read in ages and has made me pray so hard for this coming generation so much more-not just for my own kids, but also for their friends! However, it also helped solidify in my mind that-at least as much as I can-I want to give Ransom the freedom to learn out in nature and running around soaking in life before I stick him in a classroom for any length of time.

** This week our theme was planets and the solar system. Thanks to the glory that is pinterest I came up with 4 or 5 activities and crafts to throw in at different times during the week, it took a little work and pre-planning but it was GREAT not having to think about it when I needed to throw something my kids way during some free time.